Starting in the early 1800’s a variety of fur trappers and explorers entered into our Ancestral Territory. These first visitors spied out the abundant resources of the region and brought with them trade goods, new technologies, and the first wave of European diseases. These early interactions were generally very brief and amicable. However, one encounter during 1819 turned into devastation for our people when fourteen Cow Creeks were killed because they declined a fur trade. Despite the attack, the Tribe maintained relatively good relations with these outsiders for more than twenty years. 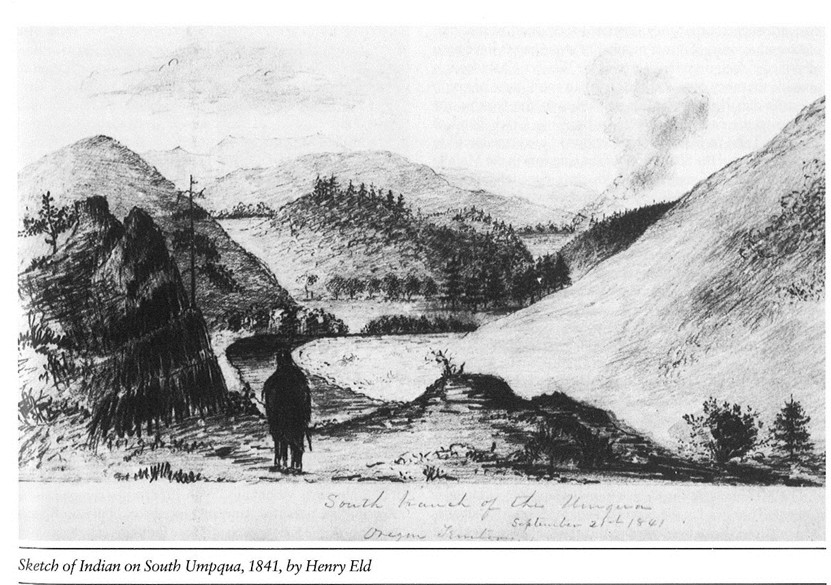 By the late 1840’s, settlers had set foot in the Umpqua and Rogue valleys searching for a new permanent home. The relations between our Tribe and the newcomers were good; however, the settlers also brought with them small pox, measles, and many other illnesses. Diseases were not the only source of suffering for our people. The settlers also caused much starvation by impacting many of the traditional foods that we used to survive. The settlers over-hunted most of the game and ruined camas fields with their cattle. Their hogs ate the acorns and many other staple foods. In addition, fences were put up, making it impossible to continue the native land management practice of burning fields to replenish the soil.

When gold was discovered in the valleys in the late 1840’s, miners began to prospect for gold using hydraulic mining, or water cannons, to expose mineral deposits. This caused the stream banks to erode and the rivers to become thick with sediment. The waters were so muddy that the fish suffocated and began to die by the thousands. In turn, this meant even less food for our Cow Creek people, because fish was a staple food used throughout the year.

Beginning in 1850, the Donation Land Claim Act was passed. This granted 320 acres to white single men and 640 acres to white married couples as long as they improved upon the land for four consecutive years. To secure the land title, the federal government negotiated a treaty on September 19, 1853, with our ancestors on Council Creek near the modern-day town of Riddle, Oregon. Our Tribe became one of the first two Tribes in Oregon to secure a treaty with the United States of America. This treaty, ratified by the U.S. Senate on April 12, 1854, established the relationship between two sovereign governments.

As a result of the treaty our ancestors ceded more than 700 square miles of southwestern Oregon to the United States in exchange for the promise of goods, services, annuities, and a reservation. According to the treaty, until a permanent reservation was decided upon by the President of the United States, we were provided with a temporary reserve including two structures and a five acre plowed and a fenced field. Other stipulations included needles, thread, 3 handkerchiefs, 40 cotton flags, misc. goods, and a promise of annuities totaling $12,000.00. The temporary reserve was the only stipulation of the treaty that was upheld.

In the fall of 1855, hostilities flared between lawless gold miners and tribal people. With the massacre at Little Butte Creek in the Rogue valley, in which dozens of tribal people were slaughtered as they slept, the Rogue River War of 1855-56 was ignited. Believing that this was a conflict in which we were fighting to avoid extinction, the Cow Creek people entered into the war. The battles resulted in a great number of casualties among the Tribal peoples. At the end of the war, the U.S. Government decided that all Indians must leave southwestern Oregon. Many native peoples and a small number of our Tribe were gathered and sent to the Grand Ronde and Siletz reservations far to the north. However, the majority of our people fled deep into the mountains of our traditional homeland.

The US Government then hired a company of “Volunteers” to start a pursuit of the Tribe. In spite of the repeated efforts of the “Volunteers” to track the Tribe, we knew our home country too well and were able to stay safely hidden. We were constantly on the run in order to survive. As a result, our people did not have a permanent home and never had more than what we could carry. This was a very hard life that caused exhaustion, illness, and hunger. To provide a better life for our children, some women married French Canadian Métis fur trappers that had settled in the mountainous region of our homeland. This became the way of life for our Tribal people for several decades.

EMAIL: info@cowcreek.com
PHONE: 541.672.9405
800.929.8229
FAX: 541.673.0432
© COW CREEK BAND of UMPQUA TRIBE of INDIANS | WEBSITE by ANVIL NORTHWEST
This website uses cookies to improve your experience. We'll assume you're ok with this, but you can opt-out if you wish. Any data collected may be used for marketing and metrics associated with this website. Accept Reject
Privacy & Cookies Policy
Necessary Always Enabled