*This article also appears in the September 2021 edition of the Cow Creek Tribal newsletter.*

See the team’s report on the Dole and Lilja elk herds; click here to learn more about their research.

A nearly four-year research project to better understand the local Roosevelt elk populations on Cow Creek tribal lands is coming to a close, and technicians are excited to report a surprising discovery.

A young female elk who was collared in summer 2019 on a tribal property near Myrtle Creek now permanently lives in Shady Cove, Oregon – over 90 miles away, after traveling the entire way herself for unknown reasons.

“In scientific terms, she’s a complete anomaly. This is not common behavior,” said Cailey Powell, Cow Creek Wildlife Technician, who has spent years documenting and observing the local herds. “It’s common for bulls to travel long distances to find new harems of individuals but for a young cow of only a year and a half, it’s very uncommon that she travelled that far in less than a month. There’s no rhyme and reason for why she ended up down there.”

The Cow Creek Wildlife Team has collared and tagged 17 Roosevelt elk who live on and around two tribal properties, named the Dole Road property and the Lilja Property. The collars transmit a location data point every couple of hours, informing technicians on where they spend most of their time.

The herds are large and very healthy, according to Powell, in part due to the team planting and irrigating a 9-acre field on the Dole Road property in an effort to provide nutritious sources of food year-round.

Tribal youth interns have also played a helpful role in the project, assisting with observation, habitat maintenance and handling the elk when tagging. Because Roosevelt elk are a culturally significant animal for the Cow Creek Tribe, the team hopes the project’s research can continue.

“The Tribe is putting huge efforts into conservation, for our wildlife and our community as a whole,” said Powell. 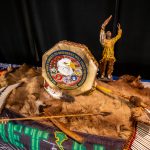